I had the great fortune to be able to visit the Isle of Man, I'll try to add some pictures and information as work allows, I plan now on going back in a couple of years.

We had magnificent weather during our visit, sunny warm and very pleasant winds. People were at the beach every day, and we saw a lot of sunburned skin, which to me was clear indication of how unusually lucky we were. 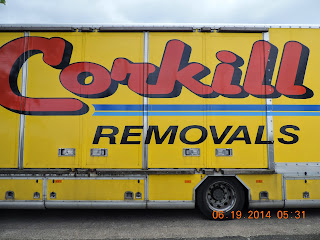 A Corkill Removals van - moving company on the Isle of Man. We also saw a Corkill Heating and Air company van. 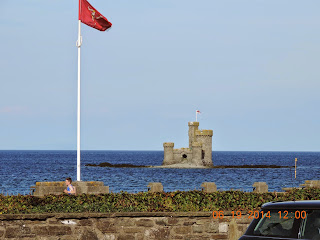 The "Tower of Refuge" in Douglas Harbor, fascinating scene as we rode in on the ferry (although this picture was from land). 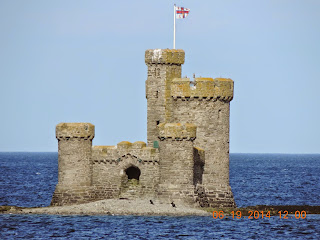 A closer view of the castle at high tide.
The Castle was made as refuge for shipwreck survivors in 1832 by Sir William Hillary who helped to found the Royal National Lifeboat Association, which is still prominent on the island. 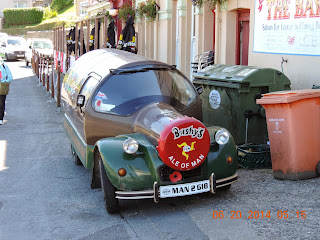 We definitely had a Bushy's, brewed on the IOM. One of two breweries, Bushy's and O'Kells(!).
I also had a fascinating Guinness with a gentleman in the Falcon Nest Hotel in Port Erin, who pointed out that Corkill is a very common name on the Isle of Man, almost like a Jones in the USA. He pointed out the page and a half of listings for Corkills in the IOM phone book (yes one phone book for the entire country!).

We also had an interesting discussion about the history of the surname, his belief was that it was related to a church, "kill" in Manx Gaellic translating to "Church". Since "Cor" translates to "English", he thought that our surname was derived from a "place name" which tied our ancestry to an "English Church":

Fascinating. I would be interested to hear others thoughts on that.

I will add more postings as I can, Pam and I took hundreds of pictures! We spent some time on the entire island, not a long enough stay. If you have interest you really should go.

I've posted more photos in an album on facebook:
https://www.facebook.com/kelly.corkill/photos_albums

Posted by Kelly Corkill at 5:09 PM