Interesting research on the DNA of the Manx:
http://www.manxdna.co.uk/
https://www.familytreedna.com/groups/manx-ydna/links
https://manxresearch.wordpress.com/2014/11/20/the-isle-of-man-historically-a-more-closely-knit-community-than-we-think/
Excellent reading for anyone interested in the history of the Corkills and the people of the Isle of Man.
There's also excellent information at http://www.mannincloud.info/ and at the Isle of Man Family History Society: http://www.iomfhs.im/

Having paid for and received results from both ancestry.coms DNA service (familytreedna.com, Y-DNA37) and manxdna.co.uk (Y-37) I am immersed in information. While I will try to digest the information over time I'll try to improve a synopsis below.

I purchased a Y-DNA37 test from familytreedna.com which provides a "Direct Paternal Lineage" trace, for description:
"What is the Direct Paternal Lineage?
Your direct paternal lineage is the line that follows your father’s paternal ancestry. This line consists entirely of men. It traces your father, his father, his father’s father, and so forth back to our shared common paternal ancestor. For genealogists, this clear line means that they can trace two or more descendants of a single man many generations back and compare their Y-DNA results with the expectation of a match. For those interested in deeper ancestry, tracing the modern geographic origins of exact and close matches means that they can discover with great certainty the origins of their own line.

Note that because Y-DNA follows exclusively the direct paternal line, common ancestors between you and your matches on other parts of your pedigree are coincidental."

There's a wealth of information embedded, essentially my paternal DNA traces back to I2 Y-DNA, and the maps and genealogists have that traced back to the origins of mankind. I worked through John Creer who is coordinating the manxdna research, after my results were returned he sent the following email:

I hope you are well. I am now back from holiday and have had a chance to look at your results in detail.

The good news is that you match closely the other two Corkhill men tested, thus confirming your Manx ancestry and possession of the genetic profile of the Cork(h)ill family.

From your Y-STR values FTDNA predict that you are a member of the larger Haplogroup I2 and possessing the unique genetic marker known as I-P37. This indicates that your early male line ancestors came from the early British Isles. See http://www.eupedia.com/europe/Haplogroup_I2_Y-DNA.shtml

We can be confident in this prediction because the Manx Corkills and the Manx Kinley family are closely related and share a common male ancestor on the Isle of Man sometime around 1000-1200AD. One of the Kinley men has been deeply Y-DNA tested, with the Big-Y test and so we can deduce confidently that the Corkills will be genetically identical.

I hope that this is helpful. Thank you again for taking part and please let me know if you have any questions,

My closest DNA matches per ancestry.com are two Corkhills in the USA, and two Kinleys on the IOM. Of course this is limited to the participants.

I'll post more and pictures as I can, so far one thing that I find is very interesting is that the first leg of I-P37 out of Africa is Sardinia. Sardinia is very close to Sicily which is the only other country IN THE WORLD with a Triskelion on their flag. Coincidence?

This is the migration path of each of my paternal ancestors from Africa. 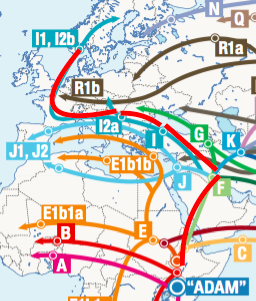 This is the larger map, I'll expand on each below. 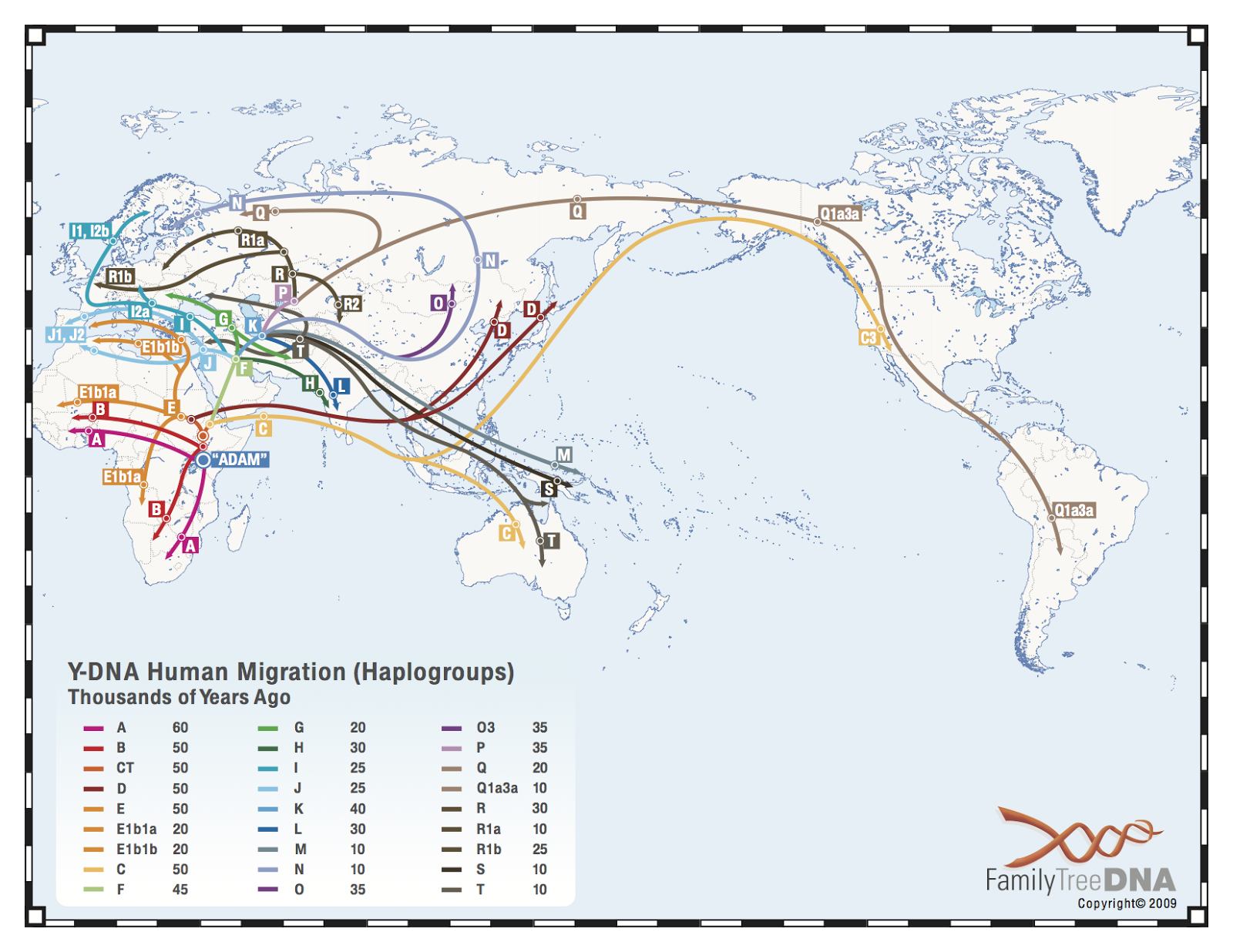 This shows the first identified branch (Halogroup F) out of Africa, in what is now Iran 45,000 years ago. 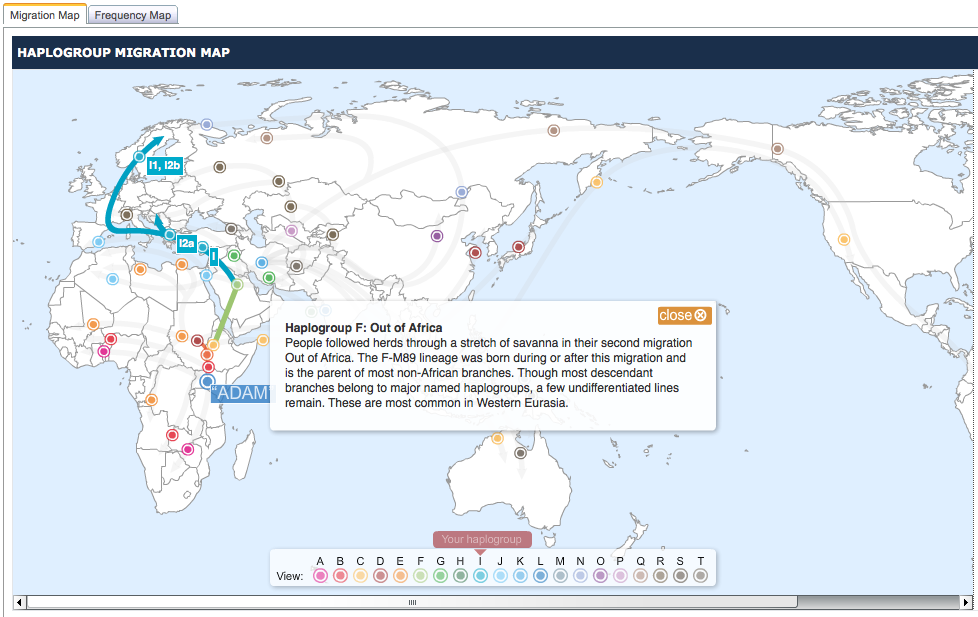 
Haplogroup F: Out of Africa

People followed herds through a stretch of savanna in their second migration Out of Africa. The F-M89 lineage was born during or after this migration and is the parent of most non-African branches. Though most descendant branches belong to major named haplogroups, a few undifferentiated lines remain. These are most common in Western Eurasia.

This show the second identified branch, Halogroup I in Western Eurasia (now Northern Turkey) 25,000 years ago: 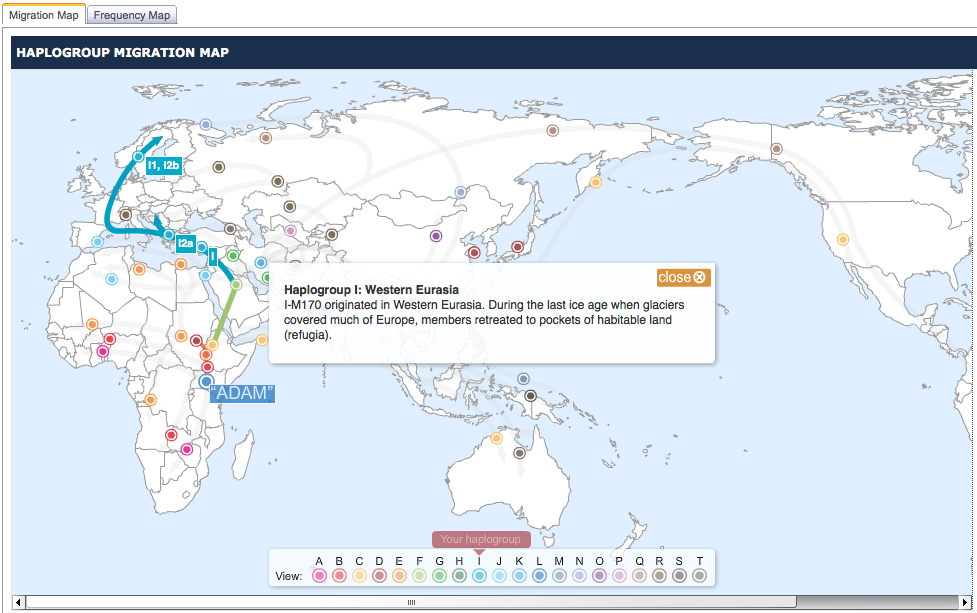 I-M170 originated in Western Eurasia. During the last ice age when glaciers covered much of Europe, members retreated to pockets of habitable land (refugia).

This shows the next measurement, Haplogroup I2a in Southern Europe (now Western Romania) 25,000 years ago: 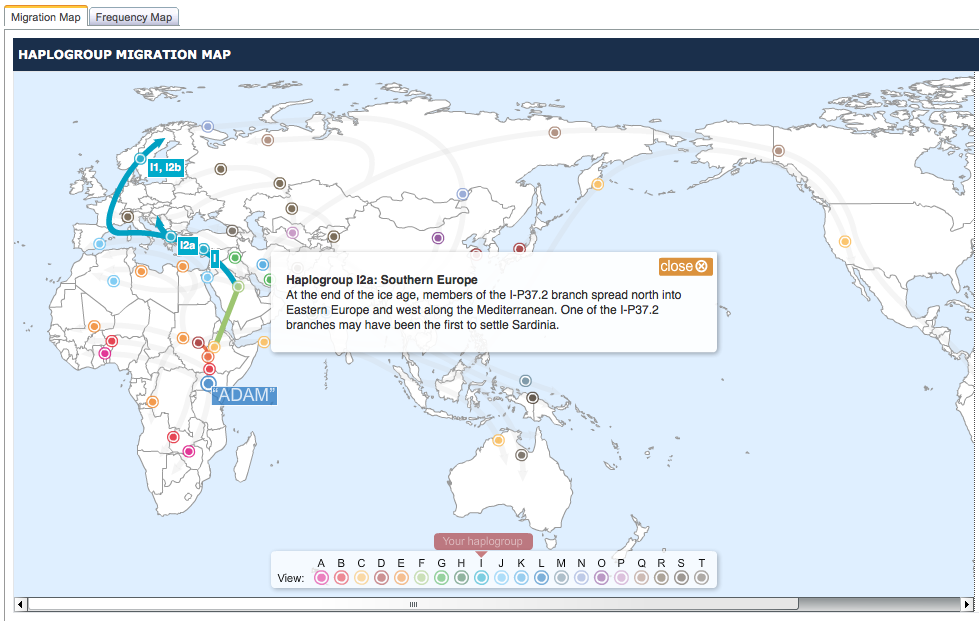 This shows the final measurement, Haplogroup I1, I2b in Scandinavia (now Norway, Sweden) 25,000 years ago: 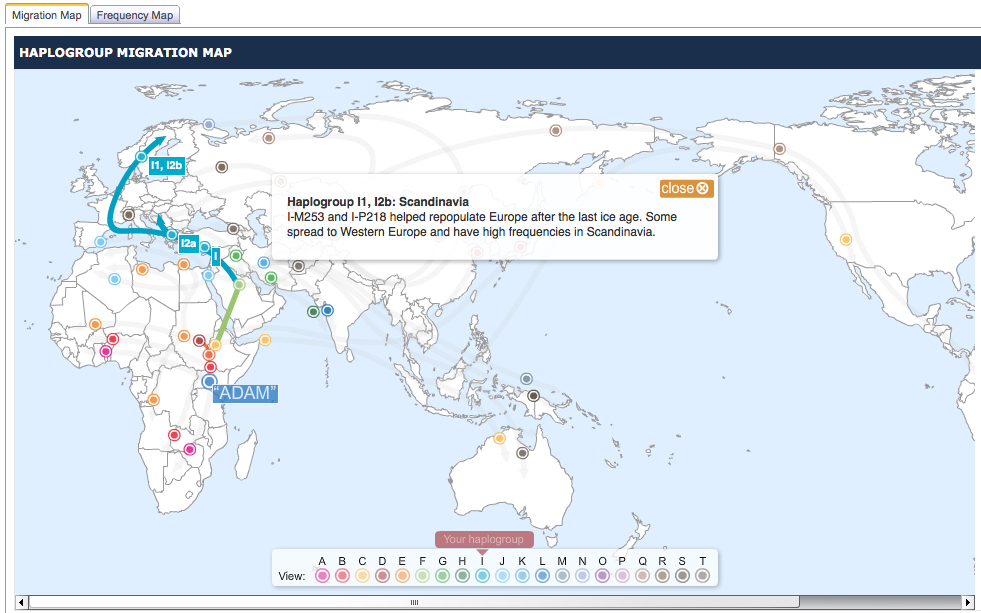 I-M253 and I-P218 helped repopulate Europe after the last ice age. Some spread to Western Europe and have high frequencies in Scandinavia.

From that point on our ancestors took many different routes. This next image shows the current distribution of Haplogroup I around the world: 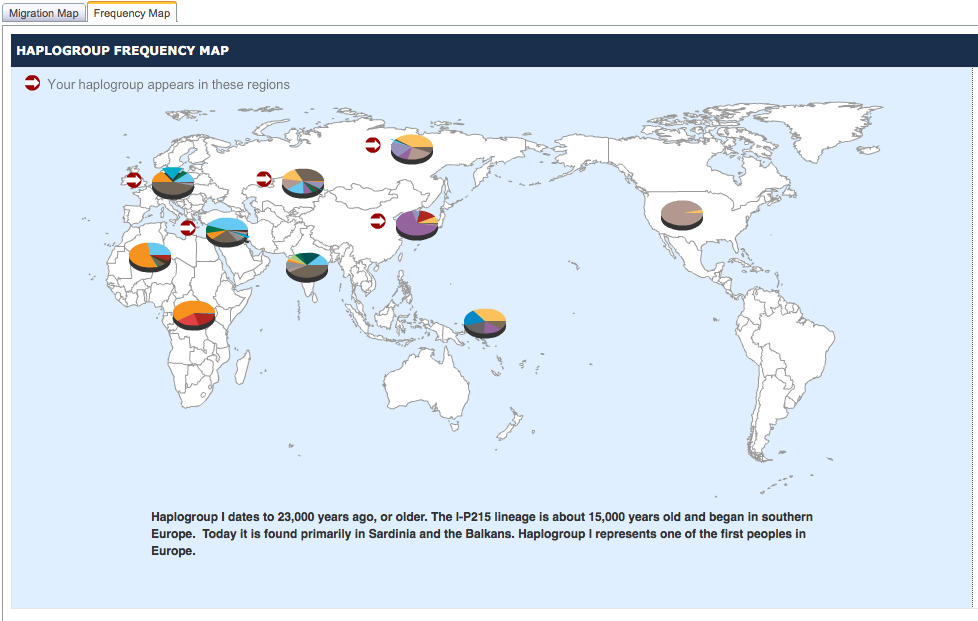 And this expands to the distribution in Europe of each haplogroup. Haplogroup I is 15.85% of Europe, with Haplogroup R being the majority at greater than 45%. Haplogroup I has it's largest percentage worldwide in Europe which firmly establishes our ancestry in Europe: 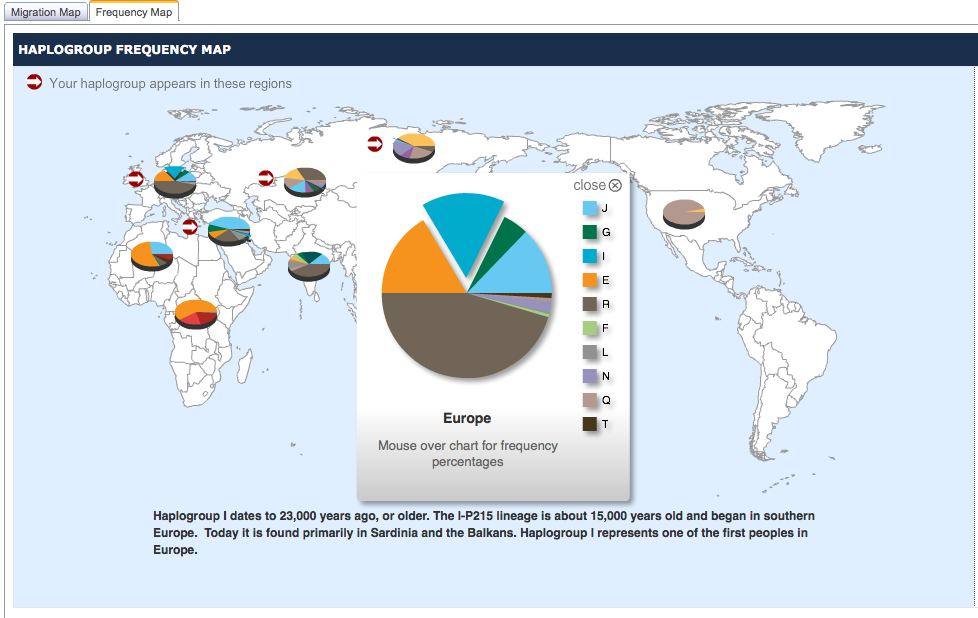 This next graphic shows the measurement points and lines:

My understanding is our placement is shown here, with the last path ending in the British Isles:

There's a lot more data from both ancestry and manxdna available at their web sites, if you've managed to get this far, my takeaways are:


I welcome any discussion about this, I am in no way an expert on understanding or interpreting DNA results. I've only read a few books and paid for a couple of DNA tests. If you have any suggestions or questions please don't hesitate to ask. I believe the experts will say that this is not yet a complete science, the more data (DNA tests) they have the better, and of course they use any DNA results they can acquire from archeological digs to reinforce. So if you're interested I would encourage you to have your own DNA tests done and add to the data. As mankind evolves and inter-marries this information becomes more differentiated and diluted every year so the more they capture now the more information they have to add to the total.

My certificate for having the ancestry DNA done: 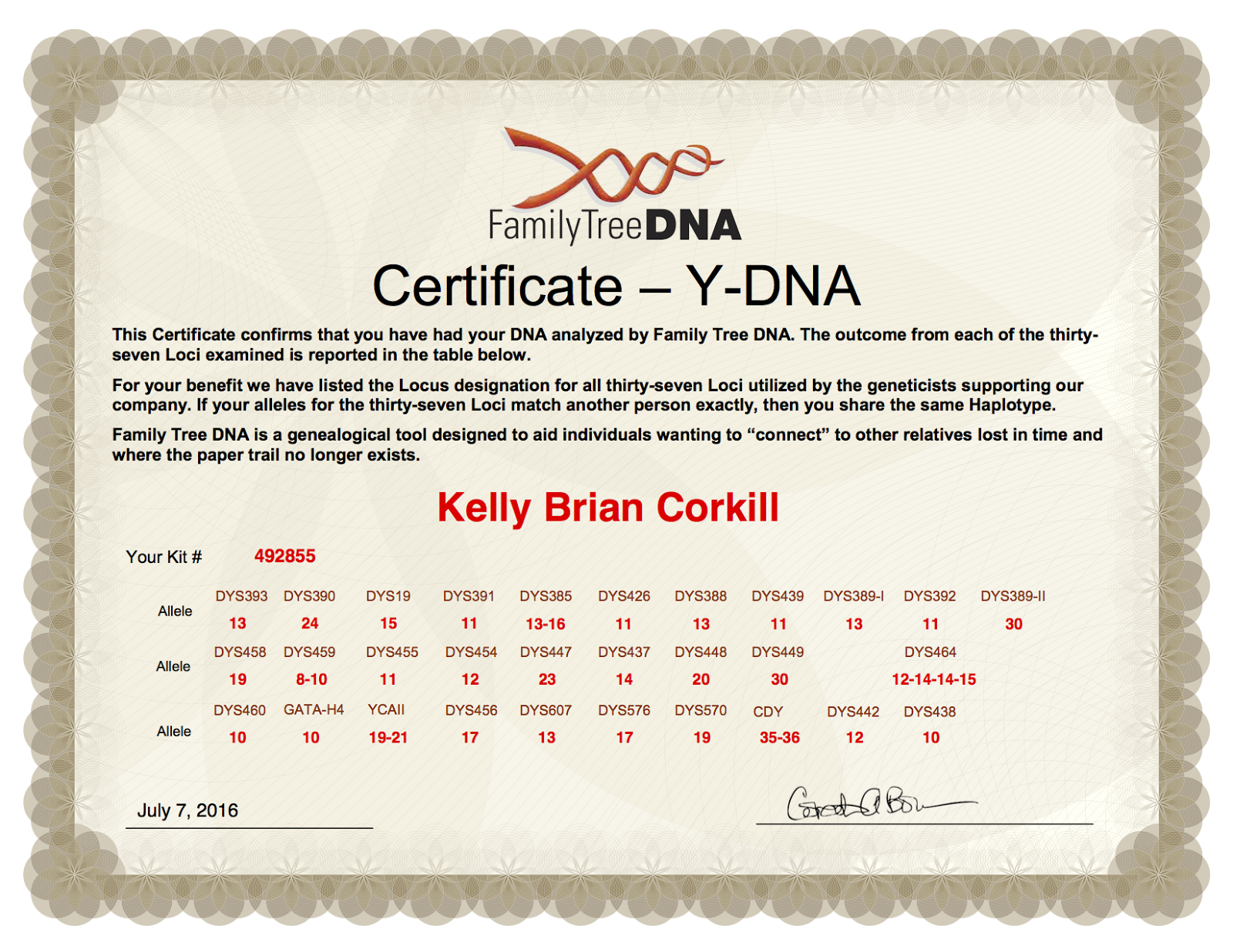 I DO find it interesting to compare the Sicilian Flag with the Manx Flag:

Histories I've seen have drawn a comparison of the two, as those are the only flags in the world that use a Triskelion logo. Knowing now that we have shared ancestral migration paths that went through at least Sardinia (an island neighbor of Sicily, located at the tip of the toe of Italy) certainly adds credence to a shared history of the icon. One notable difference is that the IOM Triskellion is rotated - I've read that the reason for that is that the Manx "bend a knee to no one"! 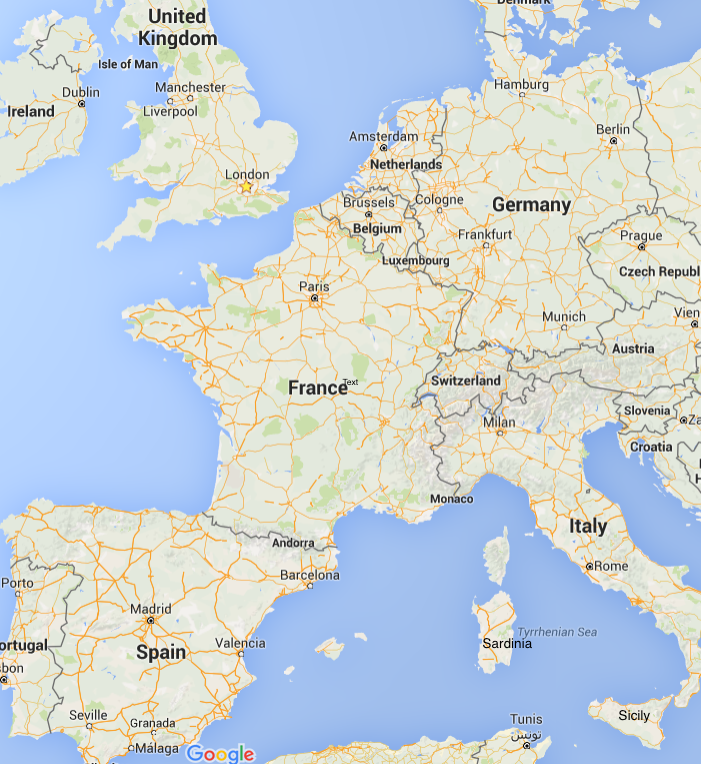 Note: All of this is subject to change. As more DNA samples are tested, as archeological digs uncover new date-able DNA samples. I will try to update this if any new information is acquired.

Posted by Kelly Corkill at 8:03 PM