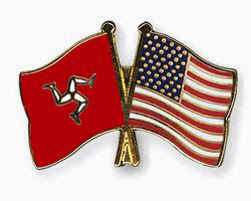 "The name is an Anglicised form of the Gaelic Mac Thorcaill ("son of Thorkell") which is derived from the Old Norse personal name meaning 'Thor's kettle'."

Which may well indicate an ancient family history of blacksmithing.

Wikipedia matches what I've been told, Thorkell was one of a series of the Kings of Dublin (Wikipedia lists two "mac Torcaills" in the mid 1100s, other references have spelled that with an "h"). The Vikings established a stronghold where modern day Dublin is and ruled it until the late 1100s when the Normans invaded in 1171 at the behest of Henry II.

While the Vikings were masters of the North Sea and controlled what they referred to as the Kingdom of the Isles, they used the Isle of Man as the base for their raids on Ireland, England and Scotland. They controlled the Isle of Man from the mid 800s through to the late 1200s AD. From that point on Scotland and England traded control through battle until it settled under the feudal lordship of the English Crown in 1399.

For such a small island (33 miles by 14 miles long, a population of just over 80,000) it has a rich history. The island's parliament, Tynwald, is reportedly the oldest continuously existing ruling body in the world.

My great great grandparents (David Corkill and Catherine Sayle) were born on the Isle of Man and came to the United States in the 1800s, settled in Illinois then moved to Kansas as farmers. After World War II their children spread to Texas, Arizona, Virginia, South Carolina and many other states. I presently live in Boulder, Co with my wife and three daughters.

It's important to note that names can be complex to track down, heck I have co-workers that today insist on putting an "h" in my name (Corkhill)! You can imagine that with the varying languages present on the island throughout its history followed by explaining how to spell your name on Ellis Island in what may well be a foreign if not heavily accented tongue It's highly possible that a McCorkill, McCorkel, Mac Corkill, Thorkel, etc are in fact distantly related. Language and records are always a challenge.

As an example this is an interesting treatise available on ancestry.coms Australian version on the history of the Corkells that ties the name to a root from Thorketil, spelling as McCorquodale:

Now that's a new one (McCorquodale)!

I hope to add more information on the Isle and my ancestors over the coming months,
While I am presently more than fully employed, I hope to visit the Isle of Man within the next 12-24 months.

If you would like to contact me, I can most easily be reached through email : corkill AT gmail.com.

Posted with Blogsy
Posted by Kelly Corkill at 4:54 PM